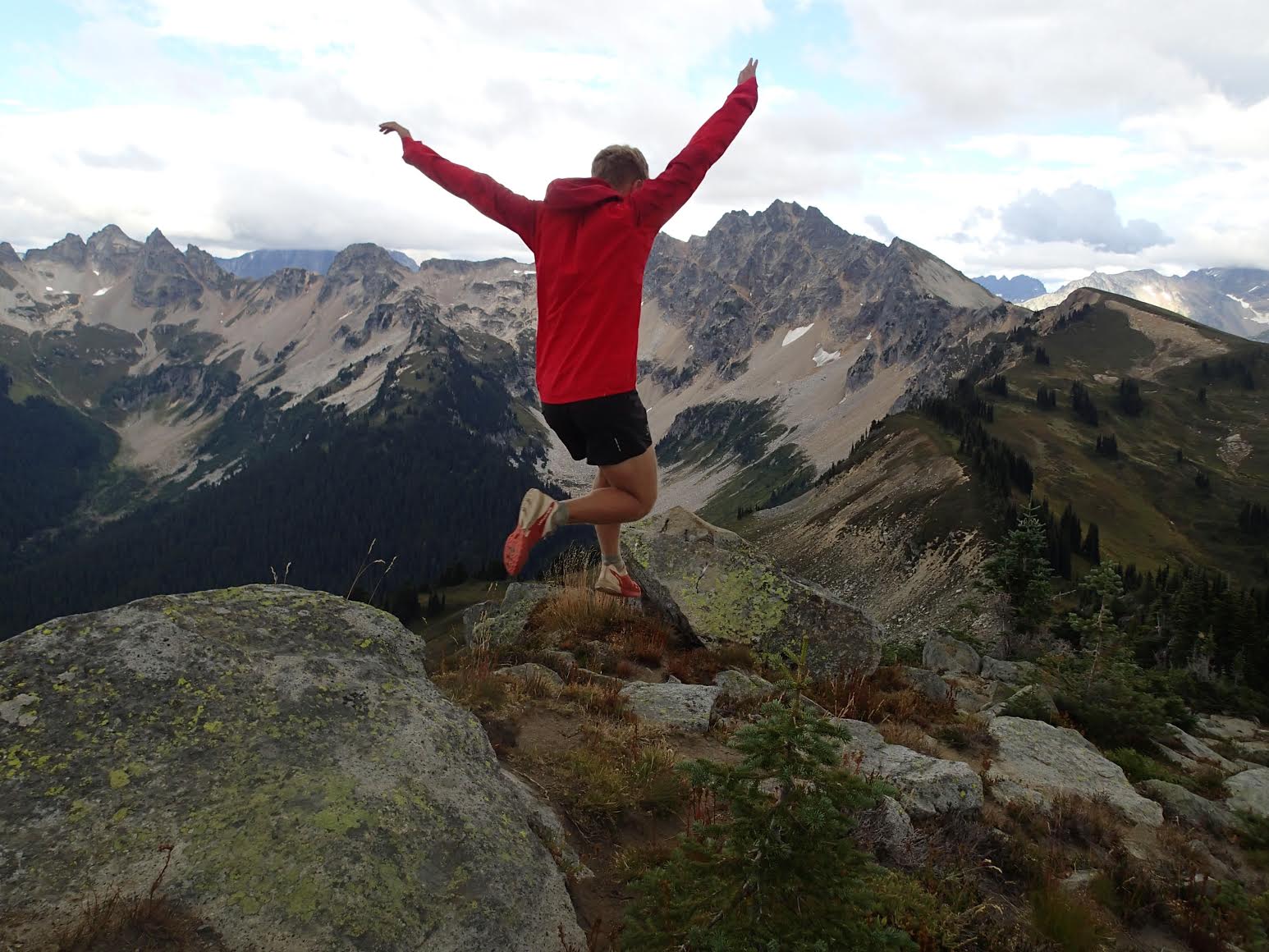 January brought a new routine of riding through Soap Creek Valley to see the elk herd.  Numerous injuries over the past few years lead me to biking as a low impact alternative to keep building fitness.  There's no doubt running is my focus, but 3 or 4 times per week I will ride after I finish a run.  Mountain biking is the most similar to trail running as I end up tackling the same climbs and descents but with abundant winter mud, I've been staying off the trails on my mountain bike.  Braking hard, especially on steep terrain trashes the trails, so I've been riding roads until the trails dry out a bit more.
Pure road riding doesn't really appeal to me all that much as there's constant traffic unless I detour onto a more secluded road.  Soap Creek Road is one of those that offers a respite from traffic and conveniently is a favorite morning haunt of the local elk herd. 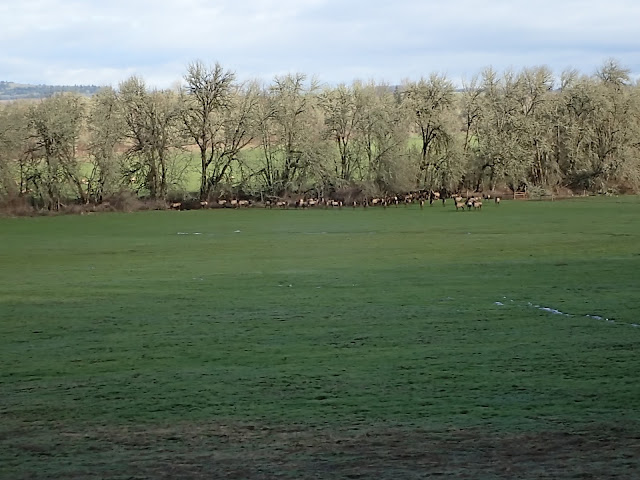 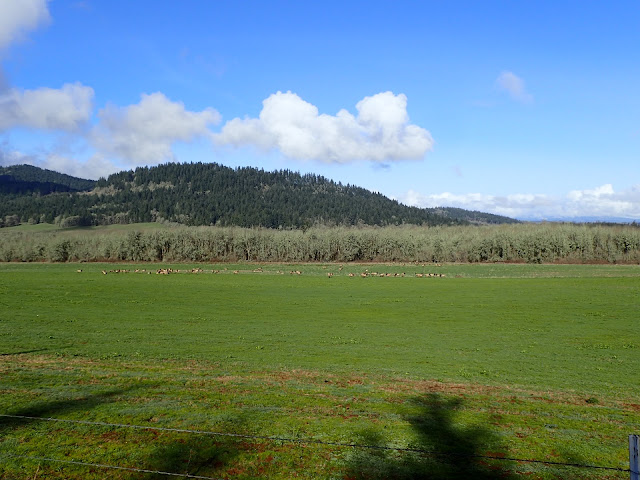 February brought freezing rain to Oregon.  On the morning of the 12th there was a quarter inch of ice above 1000 feet.  Steady rain in the proceeding weeks left the trail muddy and soft leaving them nearly unaffected by the ice.  The gravel roads offered enough purchase that running was not an issue, but I was a bit wary to ride my bike in the conditions.  There was enough exposed gravel that braking and cornering were pretty predictable, but the conditions were a bit variable.

More freezing rain was supposed to arrive on the 13th, but temperatures rose just enough to keep any more ice from accumulating.  As I toured the forest Oak Creek, McCulloch Peak, and Dimple Hill were largely free of ice.  Soap Creek Valley didn't warm up enough though and dozens of trees were down on the roads and trails in the area.  The next day I would bike down Tampico Road and see the damage further north was much worse. 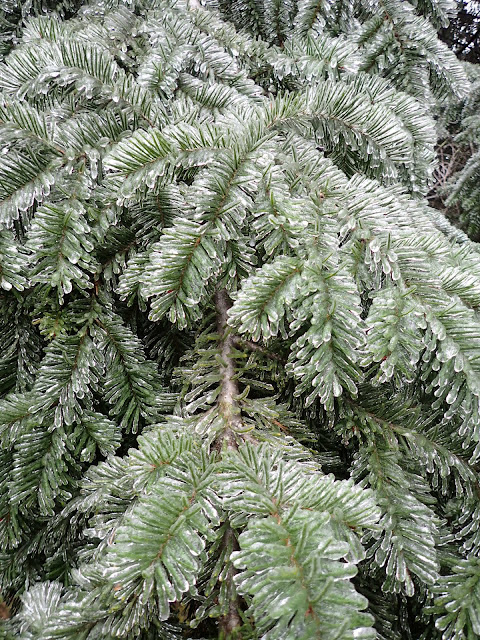 After putting gravel tires on my bike in the fall, gravel roads have provided a reliable escape from traffic.  McDonald Forest and Starker Forest have abundant gravel roads and all the access points are gated limiting traffic to an occasional authorized vehicle.  Gates aren't necessary to find solitude as gravel roads typically remain unpaved because paved roads nearby provide a shorter, faster route.  And with most people opting for a shorter drive, the gravel roads remain largely deserted. 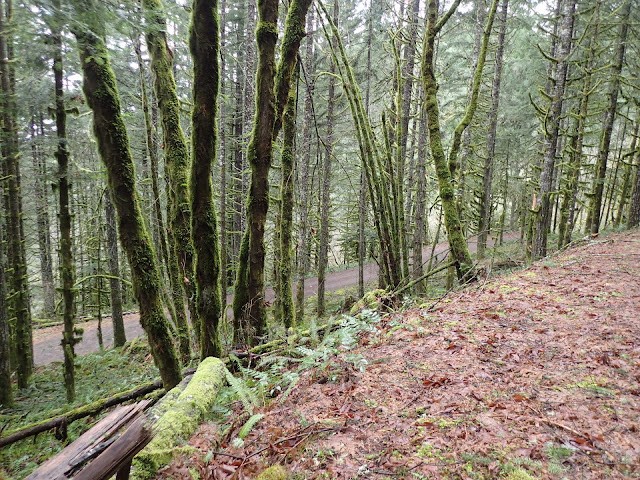 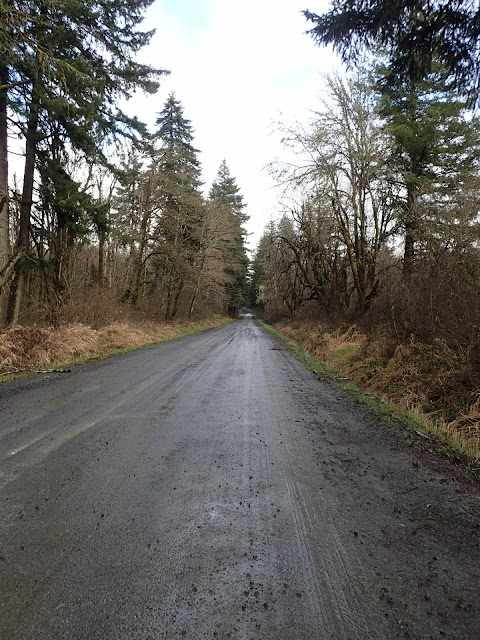 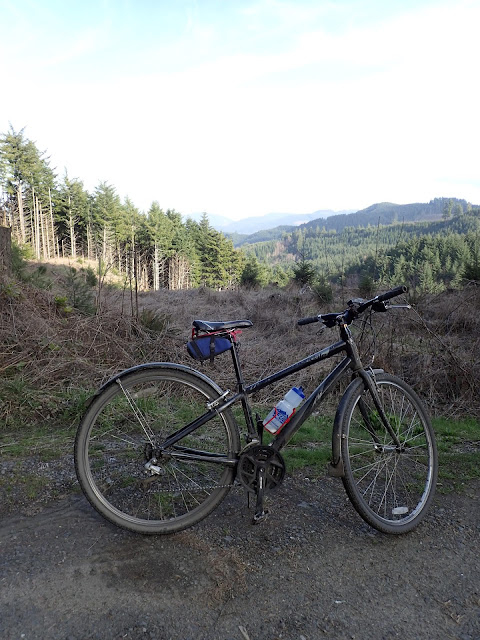 Periwinkle is one of the first flowers to show up in McDonald Forest.  After months of clouds, rain, and anticipation, they finally emerge.  Trillium are next to follow, then the fairy slippers.  Amidst the dark ground with only a few spring leaves starting to bud, fairy slippers stand out like beacons.  After the first fairy slipper breaks through the ground, the second one can take more than a week to show up.

With the recent warm weather, more flowers have been showing up.  Along Calloway Creek there are hundreds of trillium and a few clusters of fairy slippers are scattered throughout the forest.  The trails are also benefitting from the warmth and are staring to lose their coat of winter mud.  There are still some slippery sections, but most of the mud is tacky giving the trails great grip and making running fast. 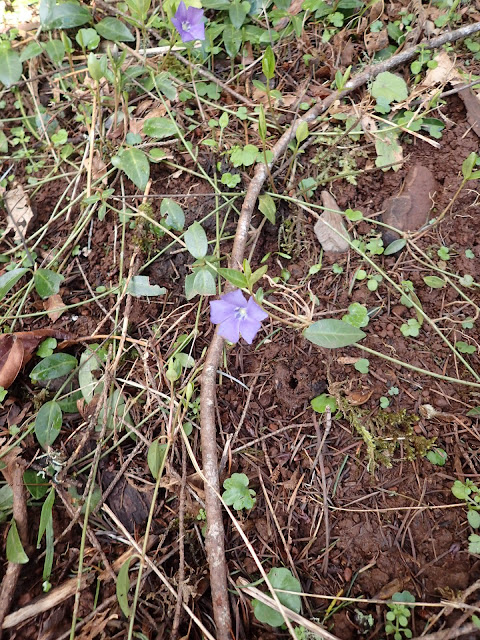 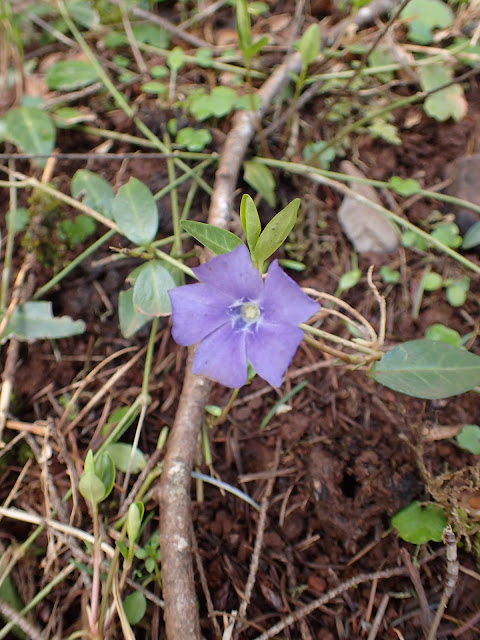 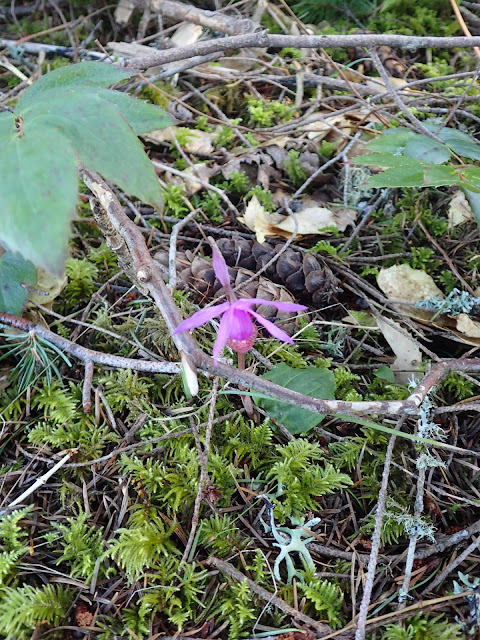 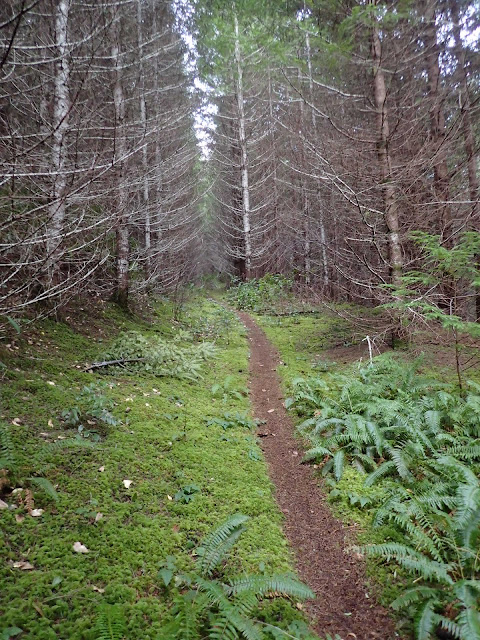 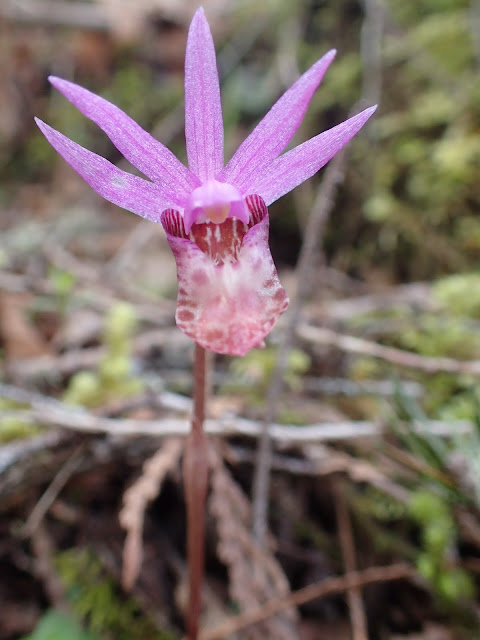 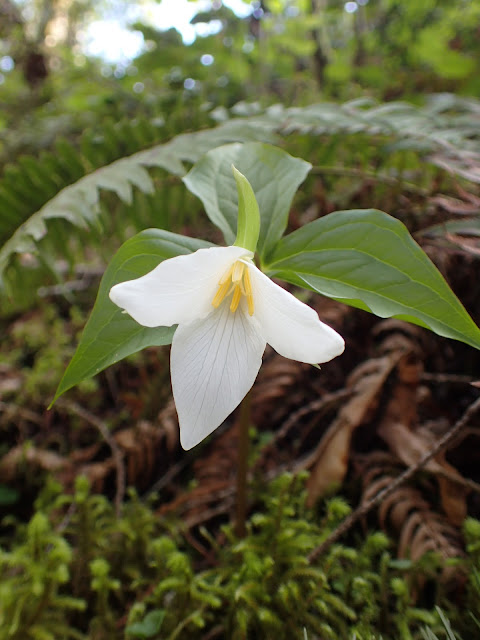 Posted by Andrew Miller at 4:23 PM No comments:

Mom and I were able to get in a short trip in the Trinity Alps last weekend.  The end of October is getting pretty late in the mountains, but we were lucky to have warm weather and no fresh snow.  Also, all my classes at OSU are taught online and are recorded.  This allowed us to leave Thursday as I was able to watch a couple pre-recorded lectures before we left and catch up after the trip on Monday.
If you'd like to follow our path through the mountains, here's a link of a Caltopo map of the area: https://caltopo.com/map.html#ll=41.02284,-122.97302&z=14&b=f16a
Thursday we drove to Big Flat trailhead up Coffee Creek road and started hiking just before 3pm.  The first half of the climb was all in the trees and we made pretty good time hiking as the trail was smooth and the grade moderate.  When we reached Brown's Meadow, a little over halfway to the Caribou Lakes basin, the air was getting pretty smoky.  We could smell the smoke a bit and all the mountains were blurred by haze so we debated going on.  We decided to push on to Snowslide Lake, the nearest lake in the Caribou Lakes basin, and spend the night there.  We reached Snowslide Lake at 6:40 and the lighting was getting pretty dim.  After a quick dinner, we headed to bed, unsure what tomorrow would bring because of the smoke. 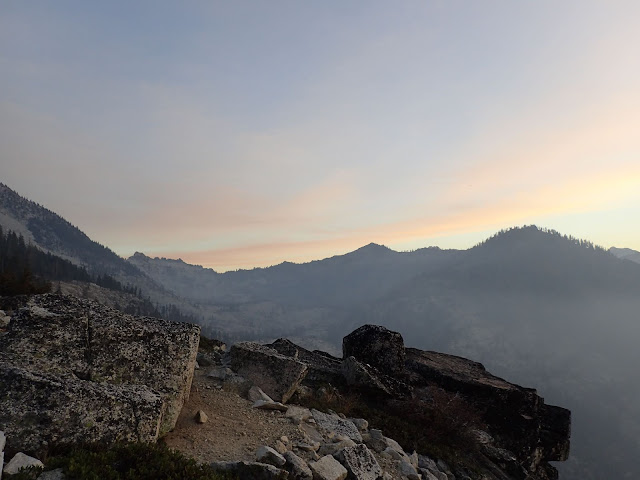 Fortunately, Friday morning brought clear skies!  Given the clean air, we pressed on over the pass to the Stuart Fork drainage.  The climb up from Caribou Lakes to the pass is fairly short, but the descent down to the Stuart Fork was quite a bit longer.  This section is all "use trail", but the trail is well established the whole way.  After reaching the Stuart Fork, we took a quick snack break in the shade, then pressed on toward Emerald Lake. 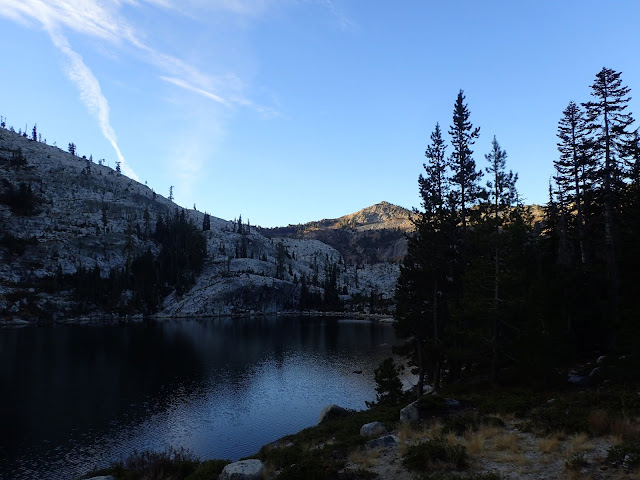 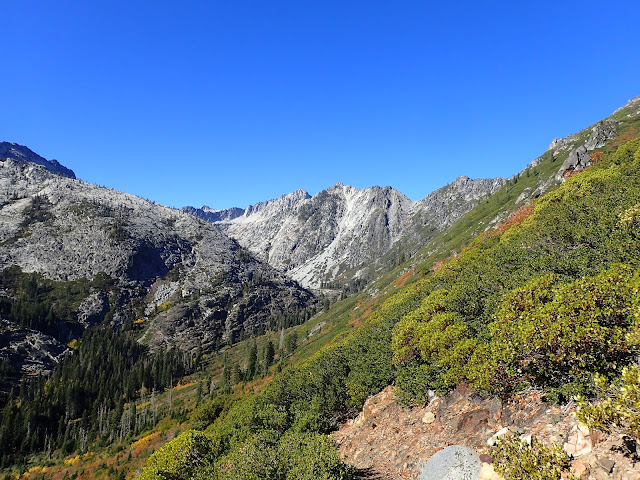 There is trail all the way to Emerald Lake, so it didn't take too long to get there.  The is a use trail along the North side of Emerald Lake, but we didn't find it right away.  The North side was brushy and I though the talus-hop along the South side would be just as fast.  So that's what we did, but it turns out that talus hopping was quite a bit slower than taking the trail.  After reaching the end of Emerald Lake, we reconnected with the trail and pressed on to Sapphire Lake.
We intended to head on to Mirror Lake, so we took the use trail along the North shore of Sapphire Lake.  This trail was very brushy and we lost it once or twice, but it got us to the far end of Sapphire Lake.  From the end of Sapphire Lake, there was some more bushwhacking and scrambling to get up to Mirror Lake.  Climbing up to Mirror Lake there was a faint trail in spots, but most of the time we were looking for cairns which marked the route.  We reached Mirror Lake around 5:30 so we had time to enjoy the views and watch the moonrise. 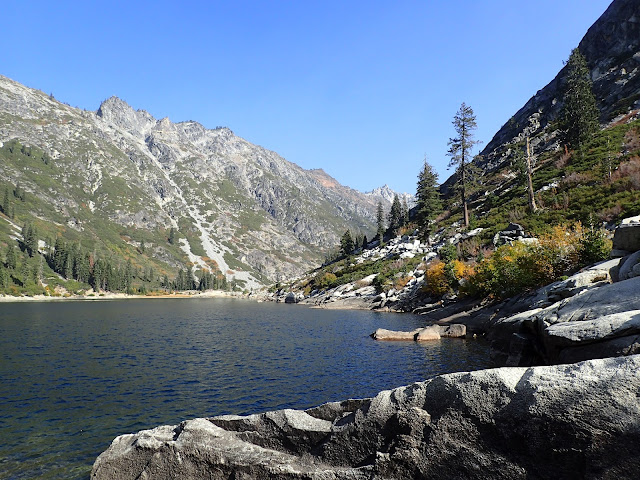 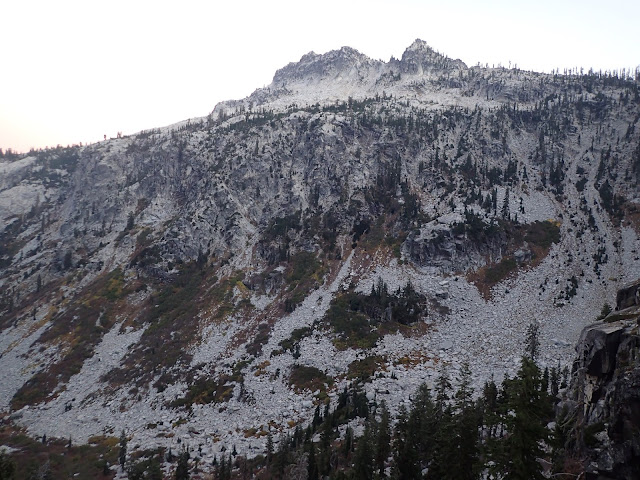 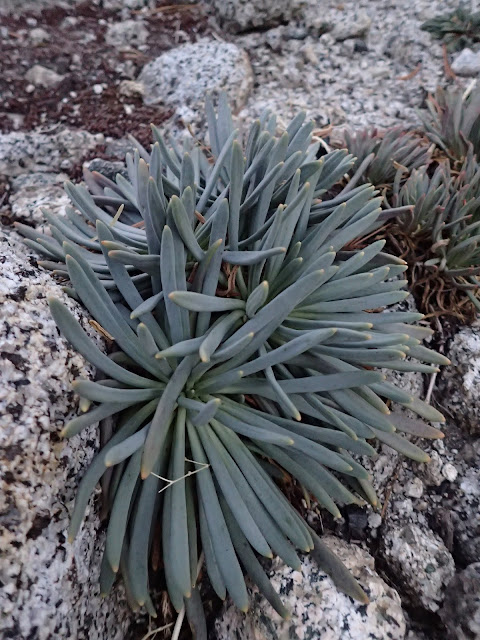 Friday afternoon was a little smoky, but Saturday morning brought the clearest skies yet.  This lead to some great reflections off of Mirror Lake!  Our plan was to head over Mirror Pass and then traverse cross country back to Caribou Lakes basin where we spent the first night.  We knew that Mirror Pass would be doable and most of the route on the far side of the ridge didn't look too bad.  The one tricky spot was "Point 7400+", but I thought that we could probably get around that.
So, we began the morning with the steep climb up to Mirror Pass.  The climb wasn't too bad, although we ended up a little too far to the right to get over the pass.  We were at the low point of the pass, but the only way off the backside was farther to the left and a little higher up.  We lost a little time traversing to get to a point where we could cross the pass, but soon we were headed down the backside of the pass.

After getting off of Mirror Pass, there are long granite slabs which made for easy cross country travel.  We hiked along these for a while before we headed into the trees to descent to a tarn above Little South Fork Lake.  The descent to the tarn was fairly easy, but as I looked at Point 7400+ as we descended, I couldn't see any good way over it.  We had a couple maps and a short description of how to get around this spot, but the route didn't look very promising.
We scoped out the route for a few minutes from the tarn before we began the climb.  We ended up heading a couple hundred vertical feet up steep loose talus before turning around and head back to the tarn.  We spent a little more time looking for a better route, but we couldn't find any.  At that point, we took a few minutes to assess our options and decided that heading back to Mirror Lake was our best choice.  It would leave a long haul for Sunday, but at least we knew we could get back. 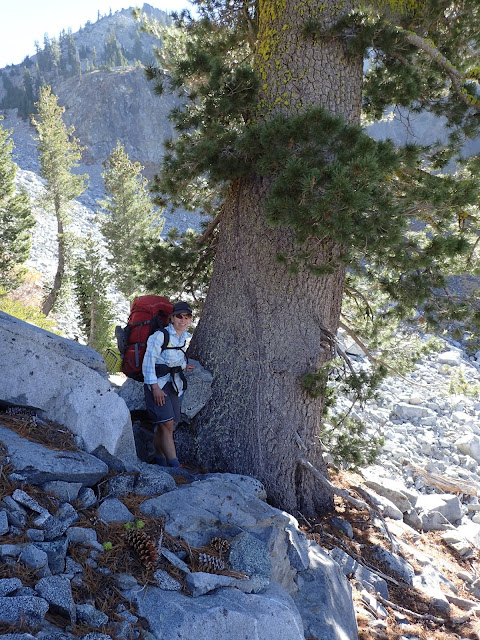 After turning back from Point 7400+, we made our way back across the granite slabs to Mirror Pass.  I thought if we could reach Mirror Lake before 5:30, we may be able to hike down to Sapphire Lake.  The climb down to Sapphire Lake involved some scrambling and route finding so we knew we needed to be through there before dark.  We made it up to Mirror Pass in good time, but we would have to get down to Mirror Lake pretty fast to push on.  We descended pretty quickly to Mirror Lake, but it took a bit too long and we got to the lake around 5:50.  We still had about 1 hour of light but it wasn't going to be a smart move to try and get to Sapphire Lake. 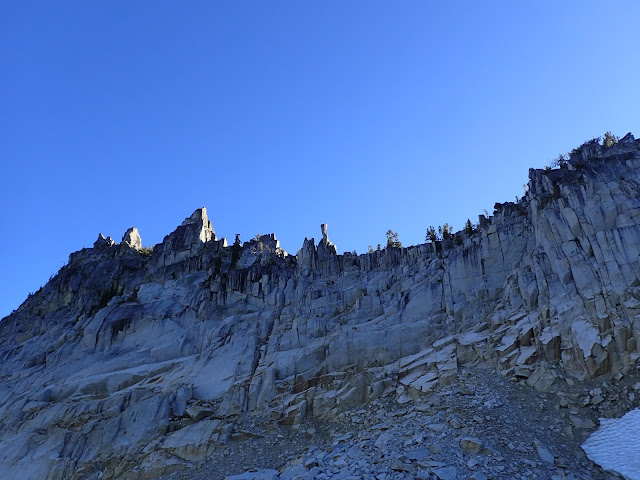 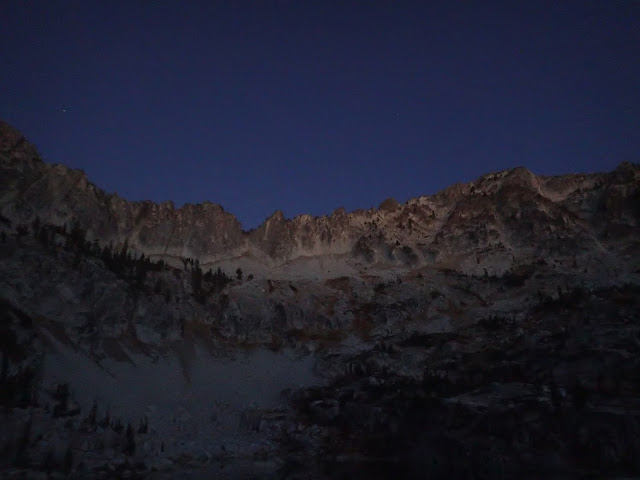 Sunday morning we got up early as we intended to get going as soon as the sun was up.  We were ready about 15 minutes too early, but once we had enough light we started the scramble down to Sapphire Lake. The top of the descent involves a bit of scrambling and we had to go backward and use our hands a few times.  The lower part of the descent is more brushy.
It took us a while to reach Sapphire Lake, which assured us that we made the right call to stay at Mirror Lake.  The trail along Sapphire Lake was just as brushy as the previous day and again we managed to lose the trail a couple times.  After getting to the far end of Sapphire Lake, we would be back on good trail until the car.  We headed down past Emerald Lake, taking the trail this time, and then down the Stuart Fork to the climb up to the pass to Caribou Lakes basin.  Part way up the climb, we saw two people which constituted all the people we saw on the trip. 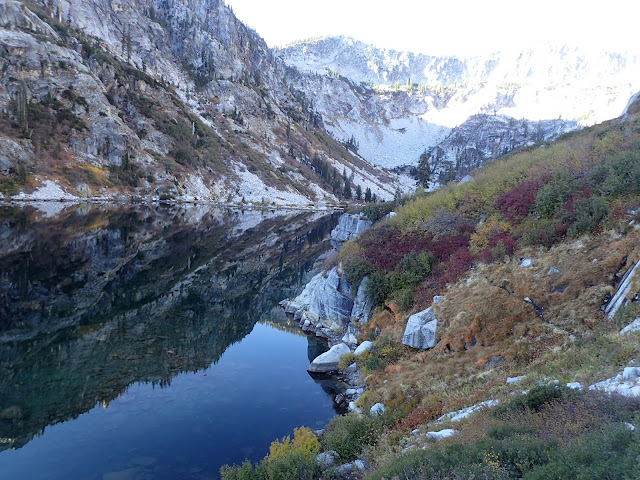 The climb up to the pass is south facing and exposed so it got a little hot by the time we reached the top around 1 pm.  We spend just a minute on the pass then descended down to Caribou Lake where we got some water and had a snack.  The traverse across Caribou Lakes basin was pretty and so was the short climb up from the lakes.  After that we'd be in the trees until the trailhead.  We took in our last good views in this section as we hiked along.  Once we were in the trees, there wasn't much to see, so we hiked quickly, trying to get to the car as soon as possible.  We got out around 6:10, threw the packs in the car and were driving about 6:15.  It took about 7 hours to drive home, but it was a great trip so the long drive was worth it. 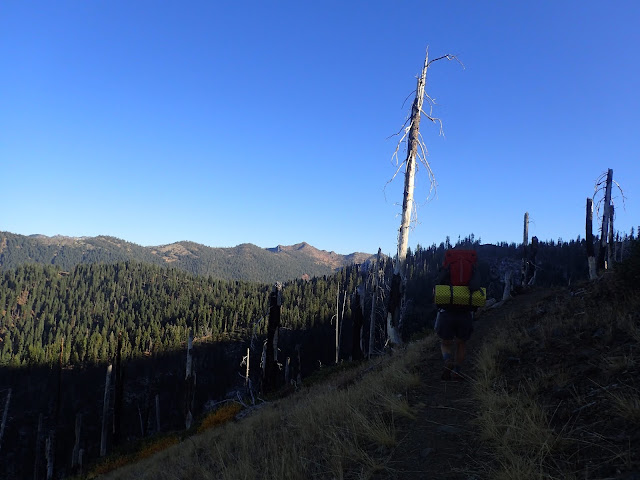 Posted by Andrew Miller at 12:13 PM No comments: 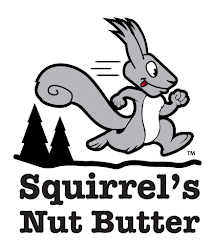 Andrew Miller
I created this blog for my family, friends and whoever else wants to follow my running. I will try to keep you up to date on my races and everyday running adventures.